Next Shows
*For a small fee to cover our administrative costs you can have access to the member’s area where you can read the latest news from shows around the world.  Learn More
Friday, 11 October 2019 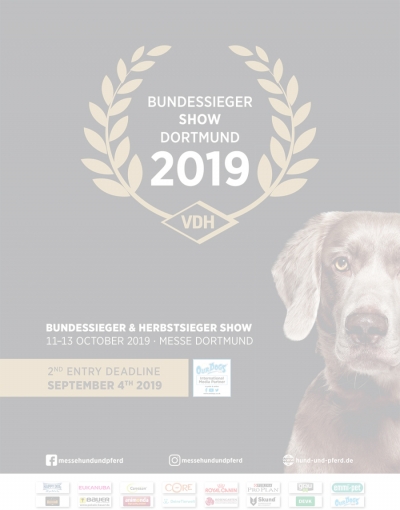 Welcome to the Bundessieger & Herbstsieger Show in Dortmund. Join one of the most important dogs show in Germany.

The Bundessieger & Herbstsieger Show will take place from 11–13 October 2019 in Dortmund. Over 8.000 dogs from all around the world. Several motorways are nearby the fairgrounds. Hotels and special camper places are directly near the halls.

Judges from all around the world are invited to the biggest shows of Germany. All rings are large and fully carpeted. The VDH Team is happy to welcome you. You have the chance to reach the CACIB and CAC twice a weekend.

You have the chance to reach the CACIB and CAC twice a weekend.

From Twitter Web Client
Our Dogs International Christmas Winner Show 2019 - The Amsterdam Winner as was had a new home in 2019 teaming up with the show in Kerst t… https://t.co/suvFFJMEmy