Updated Shows
*For a small fee to cover our administrative costs you can have access to the member’s area where you can read the latest news from shows around the world.  Learn More
Thursday, 01 August 2019 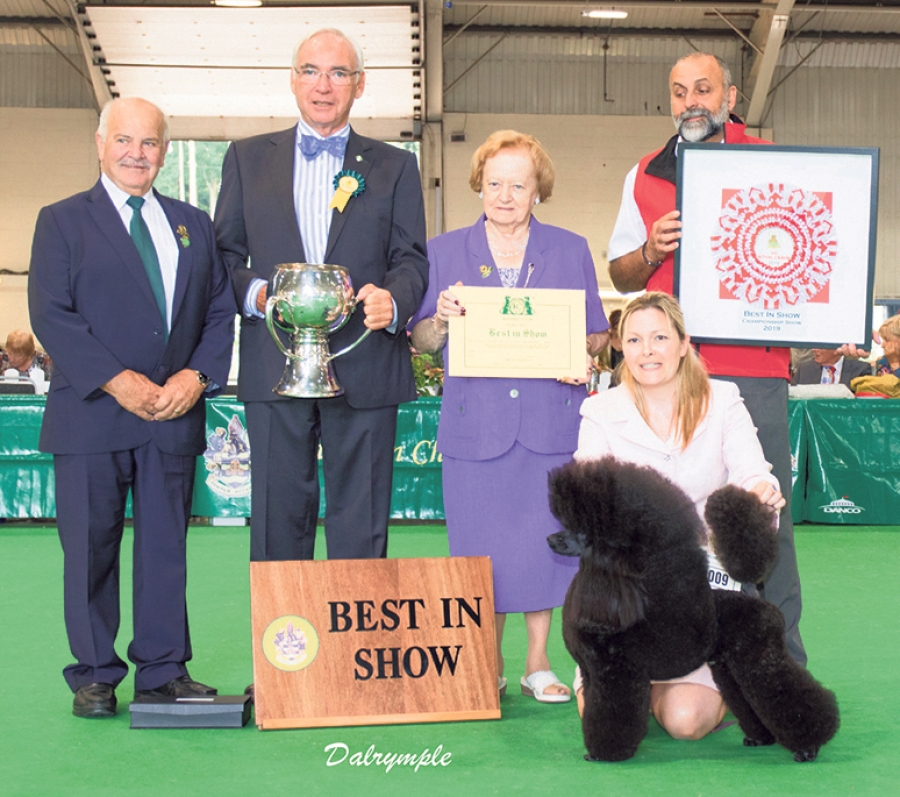 Paignton is one of the UK’s national treasures, slightly off the beaten track but loved by so many, with a great committee who work so hard to bring a consistently good show to us all each year.

View the embedded image gallery online at:
https://www.ourdogsinternational.com/show-reports/west-europe/uk/paignton-championship-show#sigProId014f78ce62
This year’s show was tinged with sadness, as two of its stalwarts left us this year, Better Summers in January and of course, Jim Nixon in the last month, both very much missed by all. The weather was kind all days on the whole, with no need for umbrellas or wellies at all, something to be thankful for. Mark Elliott provided the commentary each day.

Bill browne-Cole was the judge elect for BIS, and from a great line up his popular choice was the Miniature Poodle, Melanie Harwood’s Ch Minarets Best Kept Secret. Four-year-old Frankie is no stranger to top awards, in fact he was BIS here in 2018 under Meg Purnell Carpenter, a lucky show for this pair. Res to Frankie was the Pointer, Mrs D O’Neill & Miss J O’Neill’s Pointer, Sh Ch Chesterhope Thrill Of T Chase (Imp), handled as usual by John Thirlwell. Bill also judged the Utility and Toy groups.

The Toy group was also judged by this popular group judge, and after a good examination of all the dogs Bill put forward the young Bichon Frise, Walton’s Ashoka Blaze Of Glory At Keunnevek, bred by Sue and Dave Walklate. This young dog has had a great career so far and is still a youngster. Second to him was the two-year-old Italian Greyhound bitch, Rutter & Wheeler’s Ch Chrisford Golden Showers, absolutely no stranger to top wins and group placings.

The Gundog group judge was none other than David Shields, and his popular winner was the Pointer, D and J O’Neill’s Sh.Ch.Chesterhope Thrill Of T’ Chase (Imp), handled as ever by John Thirlwell. Group 2 was the English Springer Spaniel, Aust.Ch.Sandicam Royal Escort (Imp), recently arrived from Australia, where David had actually judged him in Brisbane! The Terrier group was judged by Shaun Watson, who had travelled over from Cyprus and was very much looking forward to this appointment, after years in Terriers.

His winner was the Scottish Terrier, Cross, Huber & Cross’ Ch Mcvan’s Big Bopper At Beameups. He was very ably handled by none other than Warren Bradley’s kid sister, as Warren was otherwise engaged at a Fox Terrier show, bet he was pleased. Big Bopper already has a BIS win and several group placings under his belt. Second to him was the Welsh Terrier, Phil Davies’ Welsh Terrier, Perrisblu The Butler, Welsh Terrier.

So far this year he has amassed four group placings. The Hound group was judged under the experienced eye of Jeff Horswell, who chose as his popular winner the Saluki, Mansell, Duddell & Johnston’s Ch Canerikie Catalina, Saluki.

This was her fourth placing in a group, her first in first place. Second choice for Jeff was the Norwegian Elkhound, Cowper’s Ch Rothenborg Leaha, who won through from AVNSC . Working Group 1 as chosen by Jeff Horswell was the Dobermann, Jojavik Devil’s Ivy JW, whom on the day picked up her 1st CC with Best of Breed, under Rodney Oldham, handled by Josh Henderson, owned by Jackie and Victoria Ingram. Runner Up in the Group was the Siberian Husky, Ch Icynights Sparkle in the Mist at Ceannabeinne, owned by Mr & Mrs Wakker.

The Pastoral Group was judged by Dianna Spavin and from her line up, Dianna chose the Samoyed, Ch Nikara Diamond Dancer JW, owned by Val Freer and breeder handler, Sue Smith. Dan has 48 CCs, Reserve Best in Show at Crufts 2014, and just the week before at Leeds, Dan won Best Veteran in Show, his 13th such win as Best Veteran in Show all breed Ch Show.

Runner up in the Pastoral group was the Bearded Collie, Ch Sammara Little Black Dress, winner of multiple CCs and interestingly, she won 3 CCs in just a week, plus a BIS club ch show, owned by Mr & Mrs O’Brien. Lee Cox had the unenviable task of judging the puppy groups, and what a task that looked like. His eventual winner from some fantastic puppies was the Italian Greyhound, Rutter and Bryan’s Chrisford Fish Finger and close up and into RBPIS was the Jones and Jepson’s Beagle Eardley Anna Sasin.